The first day in University

So the day had finally arrived. It was Friday, January the 4th. It was about time to leave the Hostel and with it the nice and carefree life and head towards the university. Kind of the reason why I am actually in Japan. 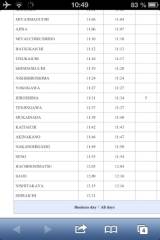 Fist I had to check which train to take and as it turned out there were only 2 trains per hour running straight from Miyajimaguchi (location of the hostel) to Saijo (location of the university). Previously I foolishly thought that all trains were running that way, turns out I was wrong. Good thing I checked. As you can see in the picture the train ride took about an hour and consisted of 16 stops. Because of the long train ride with almost no possibility to sit I decided to leave some of my luggage behind, including my camera and some of the dirty cloth, including my sweater (actually there is a small story to this you can read it in the Picture of the Day 15). Leaving behind the sweater wasn’t one of the stupidest things I have done so far in Japan, but I will get to this later. So I packed anything else and head out towards the adventure, I knew I had to take the bus after arriving at Saijo Station, but which one was no where to be found. 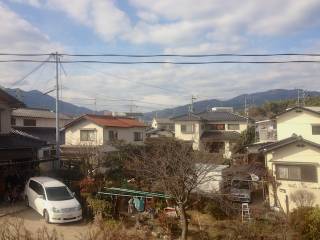 The University website only provided me with the information that „some“ of the busses will go to university and something about 1 of 2 rounds … whatever! The train ride was boring and without any events, I had to squeeze inside with my big and my small backpack and  could watch the scenery outside, which rarely changed. Normally it looked like the one in the picture. From time to time I did check my phone to see how many stops I still had to go. After arriving at Saijo Station I actually found the Bus pretty quickly because it said Hiroshima University on there. I had the stop where I had to leave the bus written down and as soon as I heard something similar I asked the bus driver if this was the stop, showing him the written name. He looked at me with big eyes like I was some kind of alien and after around 1 minute of looking at the pice of paper (I had written it in Roumaji, which is the letters we are using) he realized the stop and signed to me that it was further ahead. When we got to the stop he waved to signalize me that I had to get off here. So there I was standing in front of the building I actually needed to go to. 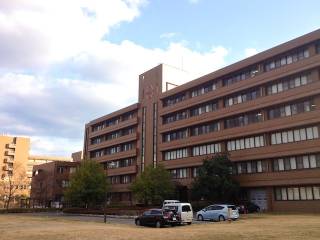 I realized it from the last time I had been there with Ion. I made my way up to the laboratory and found the person I was looking for. He was kind enough to help me with all the tasks I had yet to master and it would have been totally impossible for me to do it without him, so thank you very much (if you are reading this ;)).  I had to visit different offices in the university so tell them I had arrived, fill out forms and so on, then we went to city hall, to get my residence card, which I had gotten on my arrival in Japan in Tokyo, signed with my current address. To my big surprise we had to go and get a health insurance for me, good thing I have one in Germany for the time I’m traveling … that was some wasted money. To the current day it is still not clear if I have to pay anything for the health insurance or not, most of the papers are in japanese and so complicated, no one understands it … kinda reminds me of Germany. After this was done, I had to open a bank account. This is standard procedure and you have to have a bank account, so that you have a bank account! Makes sense. So at the moment I’m the proud owner of a japanese bank account at the bank of Hiroshima. I also have 100 Yen on it, which is the equivalent to 1 €. After all of this we went to another office in the university to get me access to my room at Yamanaka Kaikan, which I already showed you. There I got the key card and had to pay some time in advance for my stay. I managed to pay for around 20 days, because I did not have any more cash on me. I tried to get more before I left the hostel, but I was told my card was invalid … great! It later turned out the be just because of some late booking from the bank because of new year that my limit was reached for this week, so I couldn’t get more money. But by this time I did not know this, and I kinda thought I was screwed because I wasn’t able to get any more cash in Japan. And without cash you can do almost nothing in Japan. So I am kinda glad that this issue is solved. After going through all of this and I didn’t know before that I had to do half of it I was finally able to move into my room and relax. At least this is what I thought at this time … I was proven wrong, but this will be another story 🙂 So until next time … またね !

Picture of the Day 16

Picture of the Day 17