Exploring Saijo – Part 1 – Around the University 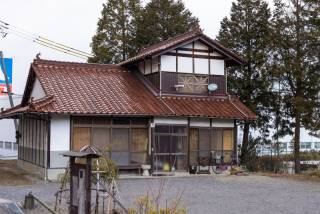 So last sunday I got to explore Saijo, the town where I currently live, a little more. I wanted to visit some shrines which were kind of near to university. There were supposed to be 2 shrines and one temple, at least the map I had said so. One of the shrines and the temple are supposed to next to each other. The other shrine was on the other side of the university campus, which is quite large. I chose to go the the place which was supposed to hold the shrine and the temple first. While I was on the way I got hungry, so I went to the next FamilyMart (convenience store) to get some food. 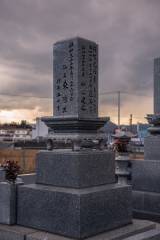 I decided to go with a burger, which had something on it which looked like chicken to me. Since everything was written in Kanji I wasn’t able to read it. Of course it wasn’t chicken, it was fish, but still tasty. Probably better then the FishMc at McDonalds… After the short meal I went to find the temple and the shrine, but in the end I wasn’t able to find them because they were not located anywhere near a street, maybe I will try again next time to find them. When walking through the countryside, yes I live in the countryside, you sometimes come across small graveyards, or an accumulation of tombstones, like you can see in the picture. You wouldn’t find this in the lager cities but in the countryside you sometimes do. Don’t worry no one is buried there, because normally you get cremated in Japan, because there is not enough actual space for people to be buried. 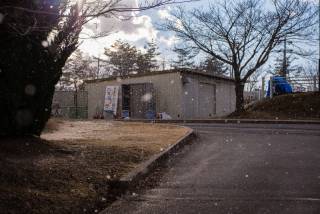 After wandering around for some time I ended up at the university campus again, which is bigger then I would have imagined. I entered the campus at a place I have never been nor seen before and started walking towards the second shrine, which my professor already told me about. The whole time the sun was shining and there were just a few clouds in the sky. You could actually see very far to the next mountains building up on the horizon. Then something started which I come to really love about Hiroshima, the sun was still shining and it started to snow. 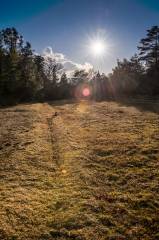 Really thick snowflakes were comming down from a sky with almost no clouds. I was told the japanese call it „windows flowers“ if you have snow and the sun shining, which happens quite often in Hiroshima due to the mountains on the western japanese coast are smaller around Hiroshima, so actually the snow can get there more easily. Just minutes after the picture of the snow this picture and also the picture about the japanese landscape were taken. I continued on my road heading to the other side of the university passing a lot of sports fields for a lot of different kinds of sport. On almost every field there were people training, soccer, tennis, running, ropeskipping …. everything. As soon as I left the campus I was surrounded by nature, to my left side there was a long artificial lake, but until now I wasn’t able to find a path down to it to take some picture. 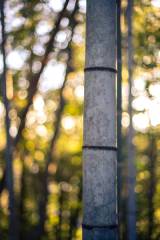 I was told there is no „official“ way to go there, but there are some path leading down to the lake. This is also something I still want to explore, maybe I try again next time from the other side of the lake. I continued on the road, well I had no other choice, because there is just this one road you can actually walk on, the rest is just plants, almost like a forrest, and lots of bamboo. I really like bamboo :D. Since I left the university area I did not see a single soul and I really don’t know why because this was a really nice path to actually take a walk. After a short walk I arrived at another accumulation of tombstones and I  could see the small shrine  between some very tall trees. The shrine was lit by the sun trough the trees, it was a really nice and beautiful sight. 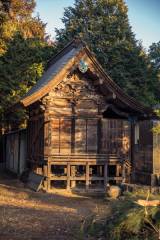 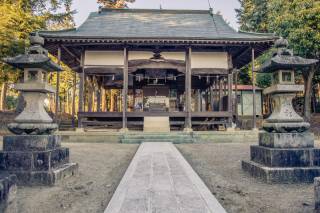 for his mother to come back from one of the graves. As soon as he spotted me walking towards the shrine he stopped playing and and started staring at me like I was some kind of alien. Well I kind of am in Japan, especially for people from the countryside, since there are not many foreigners living in Japan and most of them live in the big cites. Getting looked at is something you have to get used to while living in Japan, it’s because you are different. Not in a good way and for most people not in a bad way, just different.

I made my way around the shrine to take a shot from the front of the shrine. 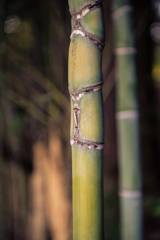 After this I went down the stairs in front of the shrine and ended up in some kind of bamboo forest, where I could take the rout back up to the university. I took lots of pictures of bamboo with the two lenses I had with me and I will probably return here to take some shots if I decide to write reviews on my photographic gear which I have with me. On my way back up to the university I met to older japanese women, taking a walk, which greeted my very friendly. I think old japanese lady are among the most cheerful, helpful and friendly persons on the whole planet. If you every have trouble finding something in Japan, just ask an old lady, even if they don’t speak your language, they are always determined to help you and also very friendly. Since the sun was already starting to set I headed back towards university because I still had to go shopping, therefore I had to cross the university campus again to go into the direction I originally came from. When I arrived at the chemistry building, the sun was just about to set on the horizon. I remained there to take some pictures trough the trees of the setting sun which looked really really beautiful. Three and a half hours had already passed and when I finally arrived at home after shopping more then four hours had passed and it had really gotten cold again. I will close this post with one of the many pictures I took of the very beautiful sunset this day. So until next time … またね ! 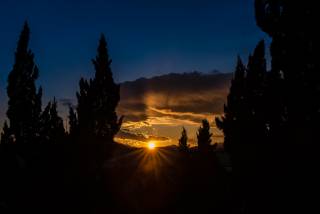 Picture of the Day 36

Picture of the Day 37