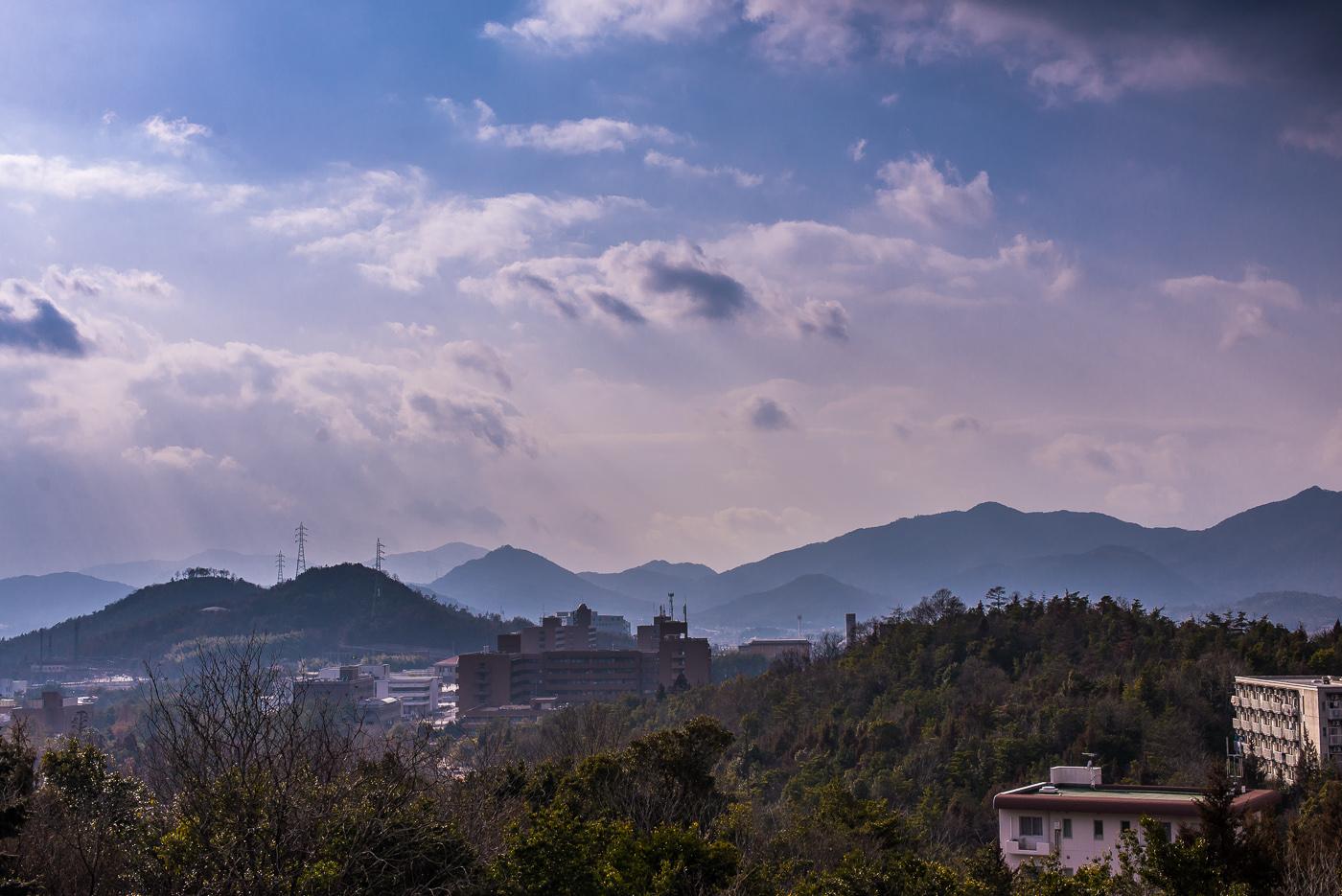 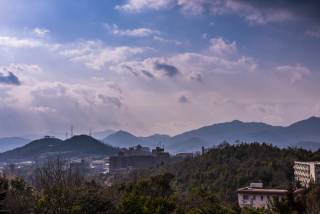 Today I decided to explore the ways behind my house leading up the hill. I was told  if I walk the road up the hill and follow it for some time I would be able to get to a shrine. I also decided to just take my 50mm lens to concentrate a little more on the photography, instead of bringing all the different lenses. So far I have never been really fond of the AF-S 50mm 1.4 and to be honest I rarely used it. So today was it’s chance to prove itself ;). Halfway up the road I had a really great view around the landscape, you can see Yamanaka Kaikan (my home) in the lower right corner. I wanted to continue on the road to 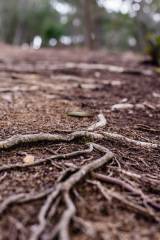 get to the temple, so after taking some shots I went further up the hill. When the road took a turn to the left I spotted a small pathways leading up the hill into the forest ad I thought, what the hell why not go and take a look, maybe you can catch some great views from there. So I left the road and went into the forest which is often more like a jungle. The pathway was obviously made by men, since all the trees where cut away and you could see branches to both sides of the way from time to time. I was always on the lookout for a great scenery, but mostly my view was blocked by a lot of trees and you could hardly see what was behind it. The path went straight upwards to the top of the hills behind my house. After some time I reached what seemed to be the top, this was where the path split into two different ones, one leading towards the direction of university, the other one to the opposite side of the hill. 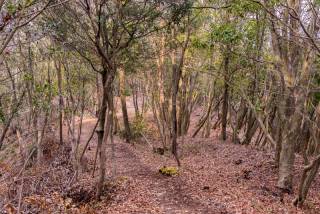 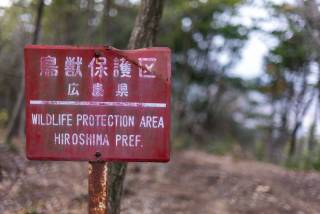 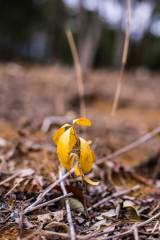 On the top there was a place where all the trees had been cut away, but new ones were already rising up from the ground. I went around the place to look for a great landscape shot, but wherever I went my view got blocked by a lot of trees. I first went to the path leading to the opposite side of the mountain, but this one descended pretty quickly and there were also some newly build stairs, so I decided to take the other way which would take me along on the top of the mountains a little longer. There also was the wildlife protection sign and I thought about what kind of wild animals might live in this mountain area, because so far I had not seen much wildlife besides of many kinds of birds and frogs. I thought about wild boars and that it probably wouldn’t be a good thing to meet some of those here. 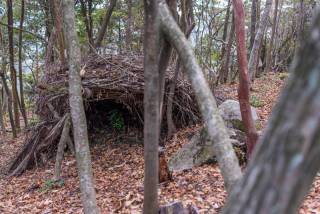 While I was walking along the path, thinking about what other animals might live here I came across this  kind of „cave“ (home?). I was puzzled about its origin, it looked man made, but why would someone do that, there was obviously no one living up here. I took a quick look but it seemed like no one was home 😉

I continued the road along until I had to go down slowly. I thought about going back to the road and continue to the shrine, but somehow I also wanted to continue to walk the path and check out where it would end. So I decided to to continue walking the path which was about to go down the mountain. 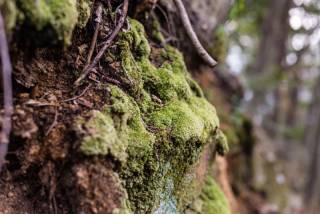 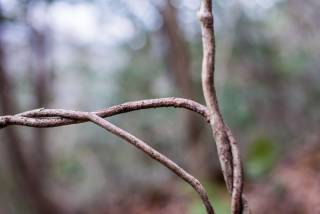 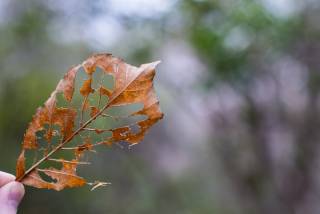 The path was very narrow and slippery and in some places pretty steep, 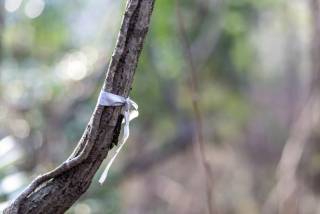 I think no one walked this path for a very long time, and sometimes it was actually very hard to figure out were the path was. After a while I realized that going back was almost impossible, it was not easy to go down, but because it sometimes was so slippery and steep going up would be next to impossible. So there was no other way then going forward. From time to time there was a small white band on the trees, I guess it was marking the pathway, so I was always happy to spot one of those. 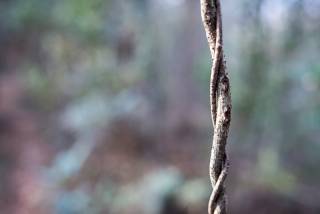 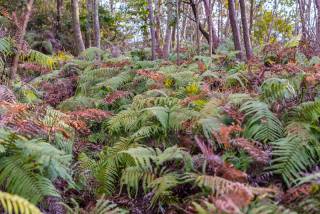 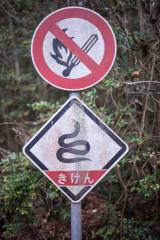 At a certain point everything was covered in brushwood, so you were not able to see the ground and where you are stepping. That instantly reminded me of the signs around the mountains always warning about snakes. Getting bitten here would be real troublesome because no one would possibly be able to find me. I had to go on anyways because going back was not an option, and I thought the end could not be so far away. My path often got blocked by lianas or broken trees, sometimes I almost had to crawl through.  This went on for quite a while, before I could peek through the trees and see something familiar. It was a place close to the university. I went a little further and could see the street I walk on every morning to university. Because I did not want to leave the woods just on 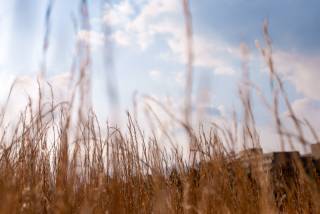 the street, because that might have caused some irritation with the local people I decided to go out a little on the side. There was a little dig site with ancient stuff I visited before. It is really small and has lots of very high plants, but you are not allowed to leave the ways. When I got out of the forest into the field (where you are NOT supposed to be walking) a police car passed by and I had to duck to hide from the police. I felt kind of silly to do so, but I did not want to cause any unnecessary trouble. After some time had passed I looked if there was any more sign of the police and I rushed to the fenced off walkways. Because it already started to snow more heavy, yes it was snowing the whole time, but not that much, I started to head home. On the way back I took a shot of the mountains, where I had walked. So until next time … またね！

Picture of the Day 66

Picture of the Day 67