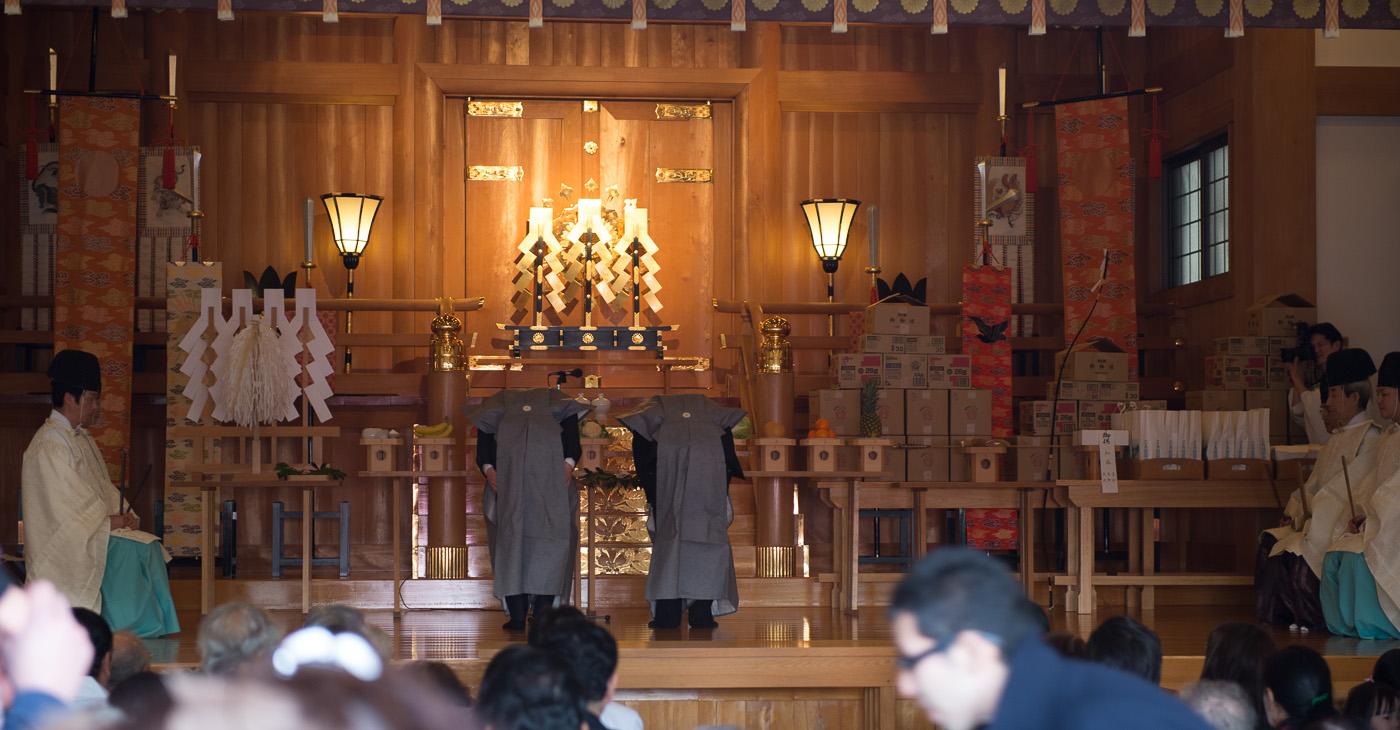 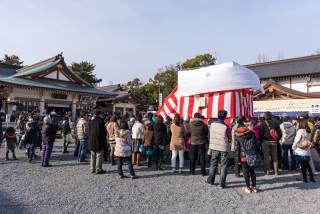 As some of you may already know, this sunday I was in Hiroshima city to check out the great setsubun festival at the Gokoku shrine at Hiroshima castle. One of our lab members, Lee-san and his family were so kind to give me a ride, since they were also going to the same festival. We actually did more stuff then just go to the festival but I save those stories for another time. We got to the shrine around half an hour before the festival was supposed to start, which was at 15:30 (local time :p) 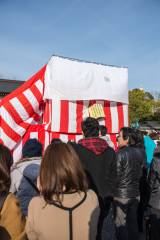 There were already lots of people when we arrived and they started gathering around the already build platform in the middle of the courtyard.

Setsubun is traditionally held on the 3rd of february and is indicating a change of seasons, it is the start ofthe traditional festivals at the beginning of spring. It is usually used to symbolically drive of japanese demons (Oni). There are many different rituals which differ from region to region. There are also many other rituals that people perform on this day like Mamemaki (豆まき) or Ehomaki (恵方巻) which you can also do at home or at university ;), in case you are working on that day. We also did the Ehomaki after the festival. For this you have to eat a rice roll (maki) while facing the roll to the compass direction of luck for the current year, which is determined by the 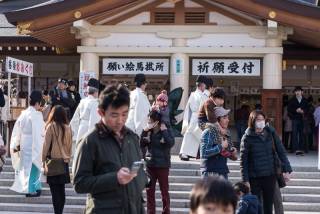 zodiac symbol of the year, in this case the snake. Why does it have to be so complicated? Anyways, after some time the priests were coming out of a building and were heading into the shrine. After a short time one of the priests was coming out again, heading towards a car parked in the middle of the courtyard. He had something with him which looked to my like a duster, which he started wielding over the car. I think he was blessing the car, for whatever reason. He started at the front of the car and carefully blessed every single inch from every direction, even the doors were opened so he was able to bless the inside of the car … different country, different rituals. 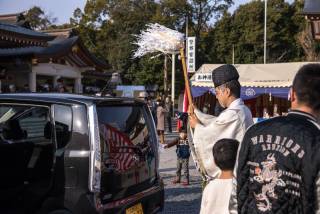 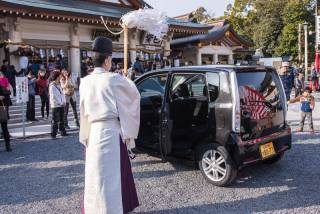 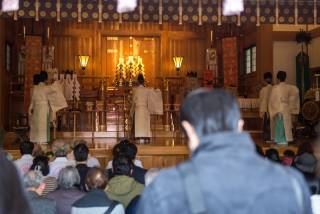 After the blessing, which did not belong to the festival itself (at least I think so) the priest headed back into the shrine, where a ceremony was held. I do not really know what it was all about, because I was still outside and could only get some sneak peeks inside trough a crowed of people watching from outside. The ceremony took quite some time and sometimes you could hear some drumming. In the mean time a really large crowd had gathered around the platform in the middle of the courtyard and there were still even more people coming! 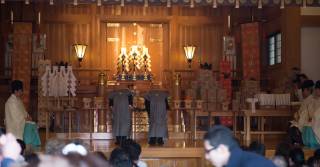 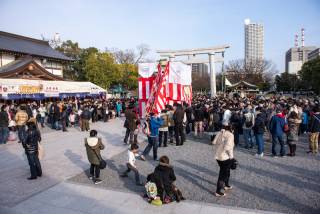 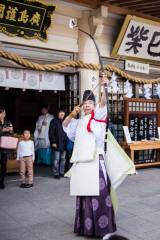 After the ceremony was finished the local event for driving of the evil demons started. At the Gokoku shrine they do it by shooting arrows at a target on which resembles an Oni face. To shoot the arrows one of the priests is using a Kyudo, which is the traditional japanese bow. It differs from the normal bows, because its not symmetrical, the top „half“ is a lot bigger then the bottom „half“, maybe something like 2/3 and 1/3. There also is a special way to shoot the bow, you start by putting the arrow on the bow and holding your hands above your head and then drawing the bow while lowering your arms to normal height. The whole process looks quite aesthetic when done right. The priest shot three arrows at the head and every time the crowed was applauding, one time a lot more then the other two times, I guess he actually hit the target on that one, but I don’t know, because I wasn’t able to actually see the target. I snapped a few photos and actually managed to get a shot mid shooting. 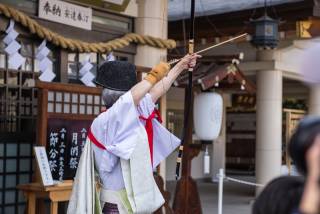 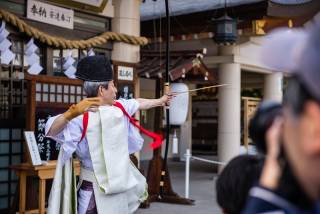 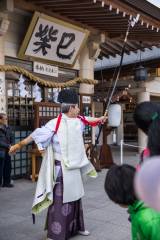 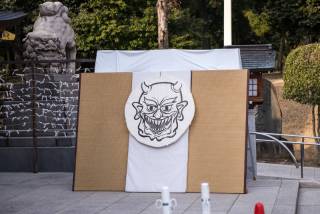 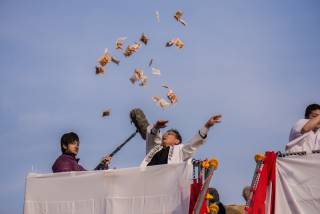 After this the priests started to climb the platform and all the people started to gather around it, but there were already a lot of people stand there still from when we first arrived at the shrine! After some announcements were made they started throwing little packages from top. It reminded me a lot of the carnival we celebrate in Germany! All the people were crazy about catching the little bags containing snacks or beans. Even all the older people gave there all to get at least a few packages! They were really throwing lots of stuff and really fast. 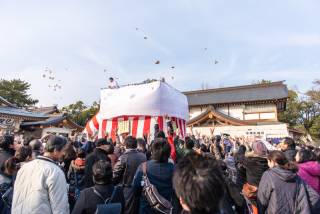 Sometimes there was a short pause, some annoucements were  made and they they started throwing again, sometimes also different stuff, like small balls or other packages with snacks, but mostly packs containing beans. In one of the smaller pauses there were to small children running away, crying really loud because they didn’t catch any of the balls that were thrown. They were actually crying so hard, that half of the crowed turned around to look a them and guess who was standing right next to the small kids, yeah …. me. I don’t even wanna know what some people thought what I may have done to them … Anyways here are some impression from the festival: 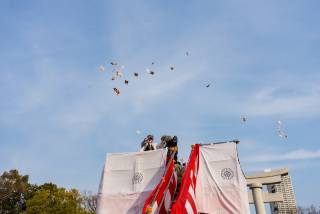 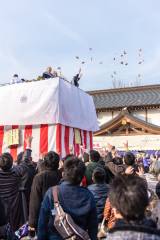 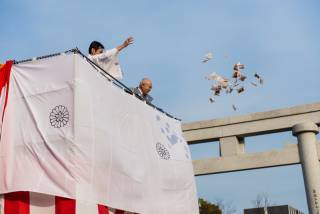 After all the gifts were thrown people started leaving very quickly and the platform was dismantled. In this time we took some time to do the Ehomaki I told you about before. I will close todays post with one of my favorite pictures from that day, which could have been taken directly out of  a zombie film! I hope you enjoyed the report as much as I enjoyed the festival, so until next time … またね ! 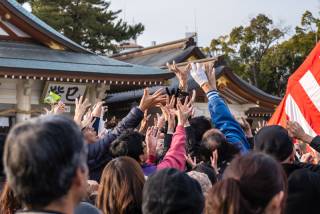 Picture of the Day 40

Picture of the Day 41