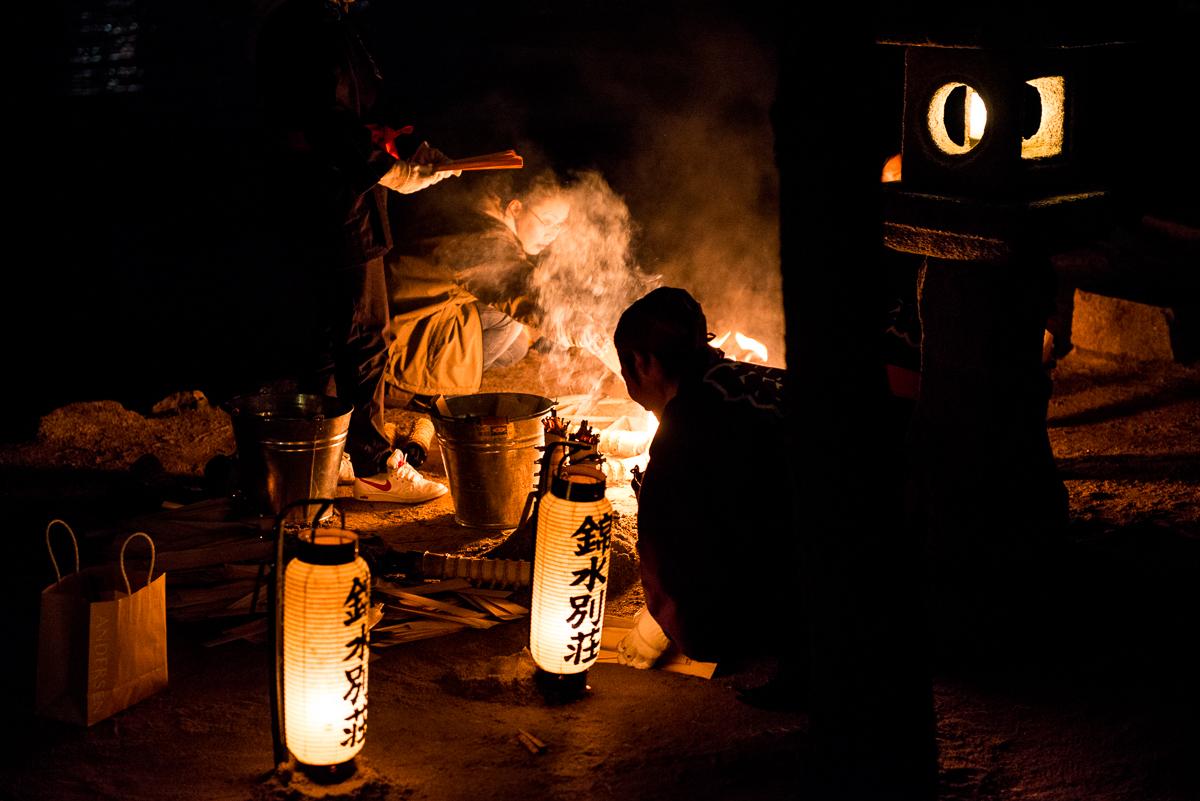 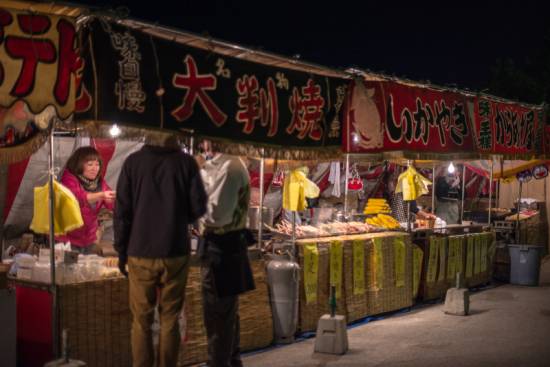 The main event on new years eve was the Fire Festival in Miyajima, which was not held at midnight, but rather at 6 p.m. in the evening. People were preparing the booths for  all the food since morning and were all set up when we finally arrived, which was 10 minutes prior to the actual event. It was really crowded and I think we were actually really lucky to get a decent spot, probably because we were foreigners. No one said anything about us standing in the front row. If you remember my adventure for obtaining the torch, the fire festival is what is was for. Apparently the japanese burn their torches to let go of the sins of the old year and start fresh into the new year. 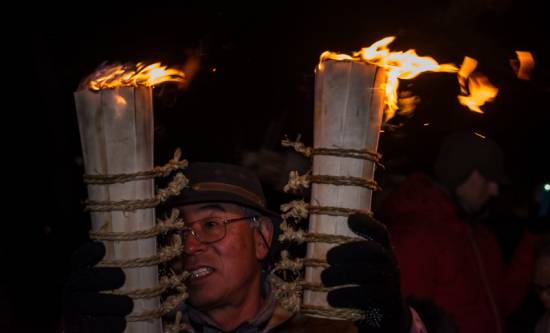 Before the festival was started and we stood there waiting,  a very strong smell of gasoline was noticeable. Then suddenly people started shouting while huge torches were about to be lit. The big torches were at least 2-3 meters tall and were carried by a lot of people. The went running up and down a designated path, were people were not allowed to stand. 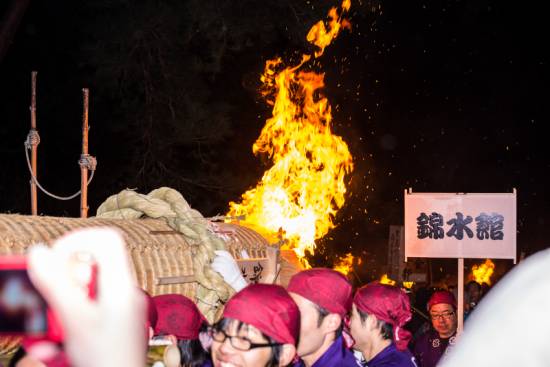 As soon as the started running and sparks were flying everywhere, people started pushing towards the big torches to light there own little torches on the big ones. This was quite a dangerous issue, because there was fire everywhere, everyone was pushing towards the torches, even people with little children. There also was a big fire spot on the ground for lighting all the torches. 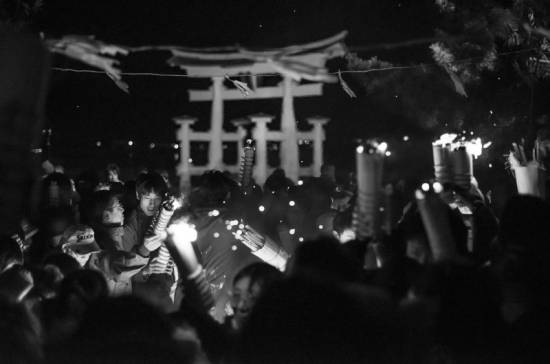 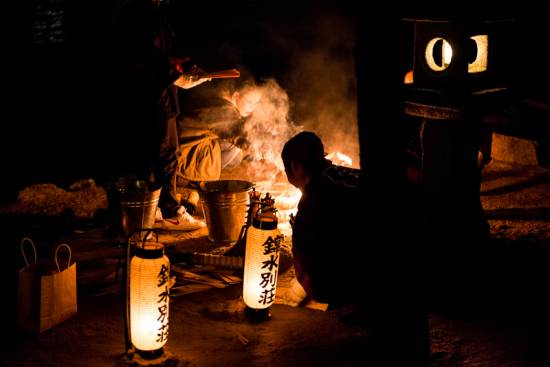 I did not light a torch, because the one I had obtained earlier was for Hisa, the owner of the hostel. 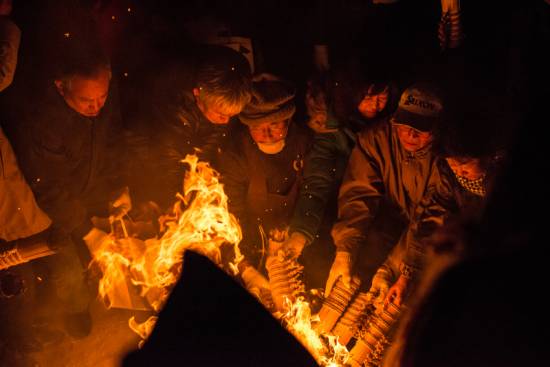 My job was to take photographs, which was quite a challenging task with all the fire and running around. Luckily I’m a little taller than the average japanese person so I ended up  photographing over their heads most of the time.

All in all it was quite an amazing festival and I am very happy that I was able to be a part of it. It is hard to describe the impressions you get from just being there. 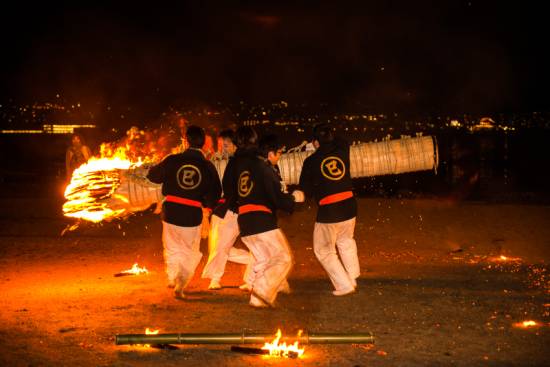 This actually is the main event on new years eve, because there are no fireworks, which actually surprised me. But I was told they only have fireworks in summer … too bad …

Traditionally the japanese climb a mountain to watch the first sunrise of the day  on new years day and go the the shrine after that. This is exactly what I did (… yeah Mt. Misen … AGAIN) after having a big party at the hostel, but this is another story 🙂 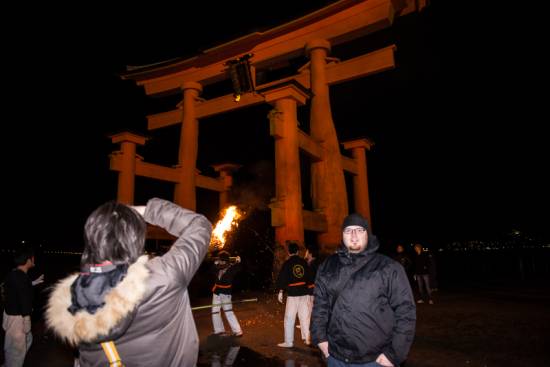 I hope you all had a great new years eve and a nice new year so far. I did!  So until next time … またね !

Picture of the Day 8

Picture of the Day 9