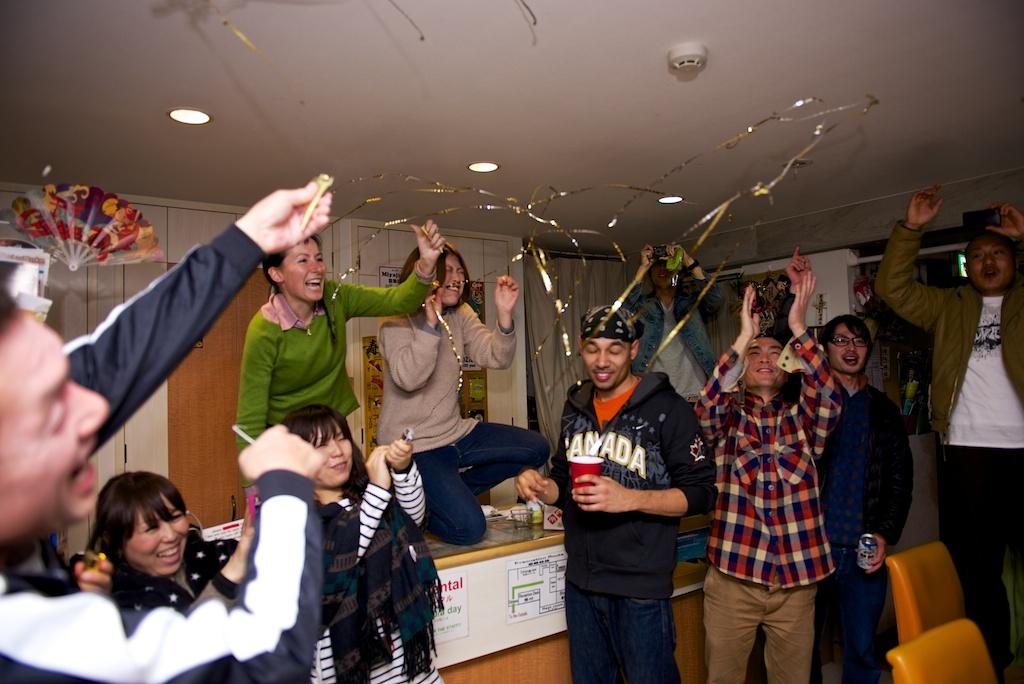 So I finally  get to write about what I did on new year. You may have already seen my awesome report of the Fire Festival. If not now is the time to check it out! After the Fire Festival it was already dark and we all went back to the Hostel. I think the Hostel was fully booked for new years eve and there were lots of cool people there. 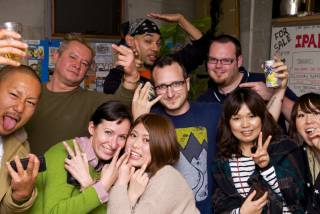 After getting back from the Fire Festival we first had some food, which Yoshi prepared in our absence. 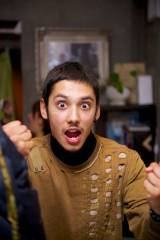 He made finger food, which Brian got from the American base, because otherwise it would be kind of hard and expensive to get this amount of meat in Japan. After the meal people started gathering in the lobby to celebrate. Some people even extended their stay at the hostel or came back just to celebrate with all the cool people at Backpackers Miyajima! The guests were a mix of mostly japanese, american and a people.

Of course there was lots of drinking involved (like always ;)). I think we had some whiskey cola … or was it gin tonic … I really don’t remember. By the way the whiskey in japan is pretty good, even the cheap stuff, it goes perfect with cola, but on the other hand which alcohol doesn’t go well with cola?! 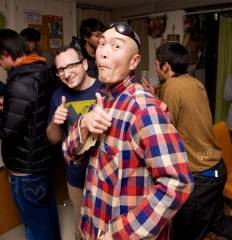 Later on in the evening Hisa prepared some traditional japanese style soba noodles, which were really delicious. Added to all the other food which was consumed this night, it build a solid base for all the drinking, which is quite common in the hostel, or in japan? I not really sure yet, but whenever there’s lots of people it involves drinking of some sort 😀

The increasing amount of alcohol always lowers the communication barriers and even the shy people, that were not able to talk any english before start talking (except for some of the french, but that is a different story). Finally the new year was approaching and everyone was getting ready for the countdown. 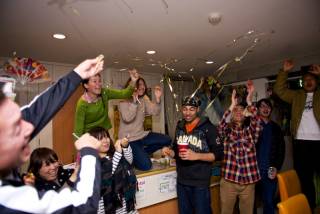 Fiona and Nagisa did the countdown and everyone was happy and partied.  Besides New year, I also have to mention that it was Yoshis birthday and he received lots of gifts. One of his gifts was a new awesome kitchen knife, because he always does the cooking in the evening. 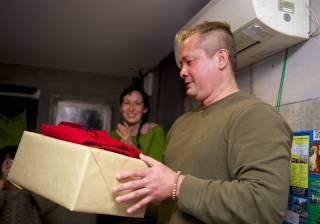 I have been told he is guarding it 24/7 and lets no one touch it 😉 Its his precious. After more and more gifts and lots, I mean LOTS of photos plans for new years day were made. Traditionally the japanese climb a mountain to watch the first sunrise of the year. After the climbing the go the temple to do their prayers and get their fortune told. I bet you can already guess which was the nearest mountain for us …. exactly, Mt. Misen.  I already wrote about my first (second in total) climbing of Mt. Misen, sorry it’s in german, maybe I will translate it if I have the time and motivation. Three of the japanese girls were determined to climb the mountain, some of the other people wanted to also do it, but were not sure of it yet, because the sunrise was around 6.15. 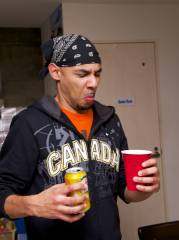 So in the end 2 of the girls fell asleep during the night, manly because they drank to much and motivation to climb the mountain started to fade. When the time for departure closed in we woke up the two girls and they still were determined to climb the mountain. Somehow the rest of the guests were not that motivated anymore. I was tired as hell but I still wanted to do it, because you never know if you get another chance. So I packed my camera and a flashlight and  we head out to the ferry to Miyajima. The path up the mountain was poorly lit and it obviously was still dark outside (who would have guessed if you go to see the sunrise..). There are actually signs saying you shouldn’t climb in the dark because of the lack of light. Because everyone was so tired we decided to take the ropeway up, which would save us strength and time and we were lacking both. 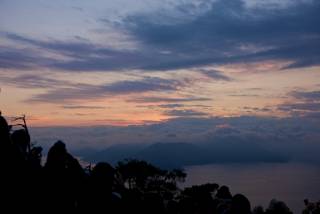 When we got up the sun started already to rise, but unfortunately it was very cloudy so you couldn’t see that much. It still was a beautiful sight, but I think it was nothing compared to when its actually not cloudy. You may have seen my Picture of the Day from the second sunrise of the year, which was a lot more beautiful, at least in my opinion. It also was pretty crowded up there and it was hard to get a good spot to take decent photos, everyone was taking photos and I had to shoot over their heads to get a shot of the „sunrise“. 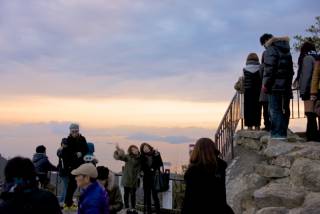 After the sunrise we started descending the mountain and went to the Itsukushima Shrine, which I already showed you in my post about the neutral density filter I got for my birthday. 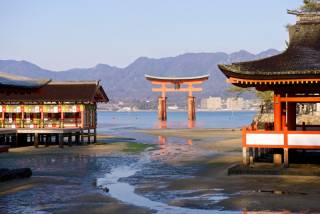 I was able to get some shots but there was an endless stream of people pushing forward to the Shrine, so we just went inside, said our prayers and got our fortune told. Here you can see a shot of my fortune right next to all the others. After the shrine the girls got something to eat from the booths, that were still there from the Fire Festival. Then we finally went back to the Hostel, the girls went the the train to ride home. When I got to the hostel some people were up again already because it was around 9.30 when I came back. At this point I was awake for almost 30 hours, because I always get up so early in japan. So I was glad to be back again, just brushed my teeth and went to bed to get at least some sleep. 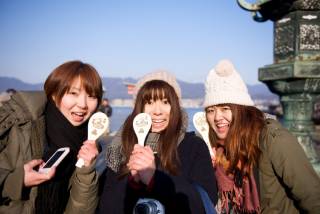 So that basically covers my events on new years eve and day, I hope you enjoyed reading it. So until next time … またね !

Picture of the Day 13

Picture of the Day 14